So lets start on with the ingredients!

So to begin, slice and dice the ingredients! (lol) and once that is done, i started off by heating up the wok and pouring some olive oil into it, and then some chopped garlic, once it gets slightly golden in color, i pour in the prawns to give them some good frying. Prior to that they are marinated with just salt and sugar. Same method applied to the sausages, after both items fried to satisfaction, i take them out of the wok and proceeded to pour in the premade Alfredo pasta sauce:

Before pouring the sauce, I’ve had some garlic and onions fried with olive oil, to get that extra aroma/taste out for it. Once the onions and garlic gets slightly cooked (very noticeable with the strong aroma coming out) i just pour in all of the sauce along with some milk and sugar/salt. Below is a picture on the fried prawns and sausages: 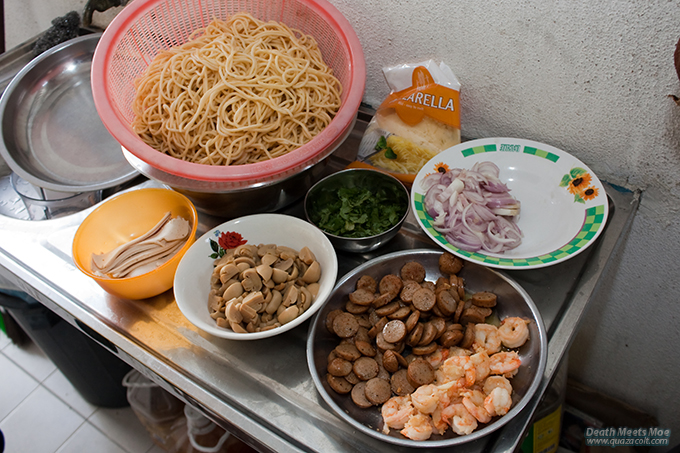 Once the sauce thickens a little, just proceed to pour in the cooked spaghetti, and let simmer for a minute or 2. Lastly just pour in the rest of the ingredients such as the mushrooms, prawns, sausages and ham. And its done: 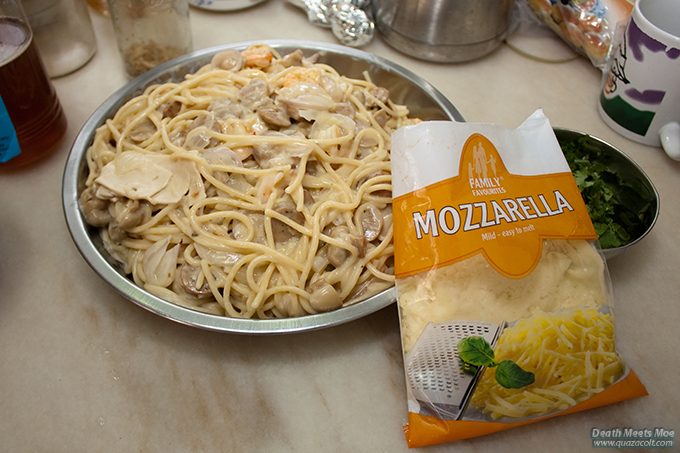 So lastly, all that’s left is to sprinkle some cheese and Coriander and its finally done: 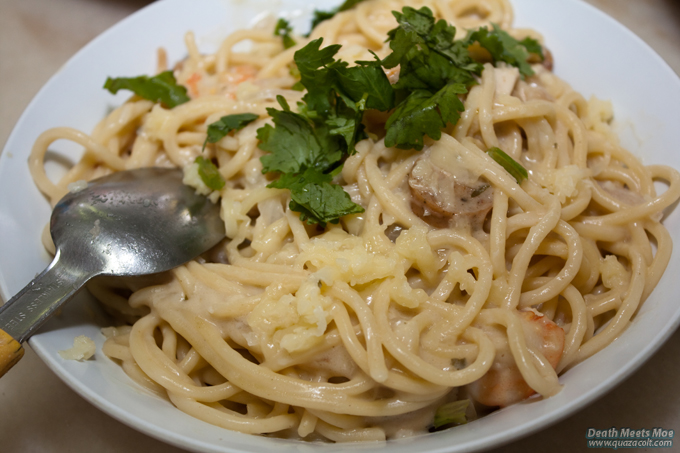 Pretty simple ain’t it? Well, considering the delayed post, and I’ve already went on and cooked up a second Carbonara dish, i guess ill post it up too! So for the ingredients:

Ok I’ve gotten a little lazy for this particular dish, then again, the original recipes i referred from the Internet is much simpler, so why not just keep it simple as well? 🙂 The only slightly “challenging” part was trying out how to cook the sliced pork differently, which i will explain. First off, the pork is marinated in salt and a LOT of black pepper, with an egg mixed into it. I start with the usual garlic in the wok, and then in goes the pork. Once the pork is somewhat half cooked, i pour in some milk and let the meat absorb it. Once its drying up, i sprinkle some Parmesan over it, and of course, putting them aside on a plate. The aroma and taste was surprisingly good after tasting a few pieces of it ^^ 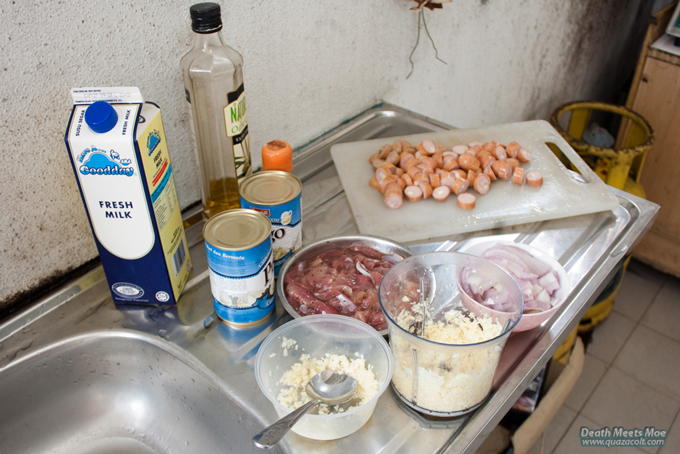 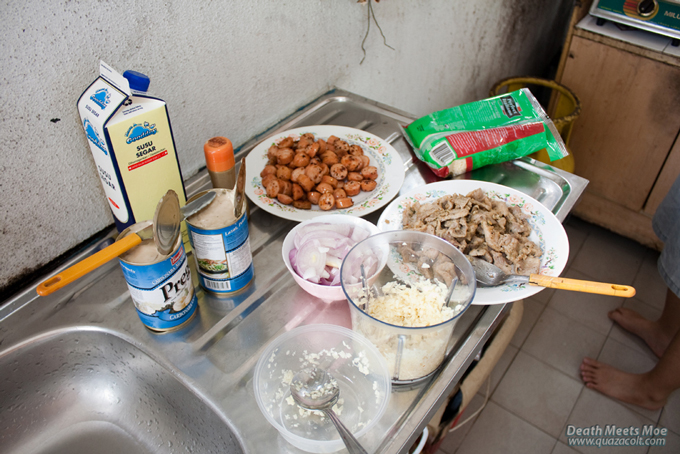 The rest was pretty similar to the above dish, frying up the sausages as well and then taking them out again. The sauce on the other hand had some slight difference – LOADS of black pepper. 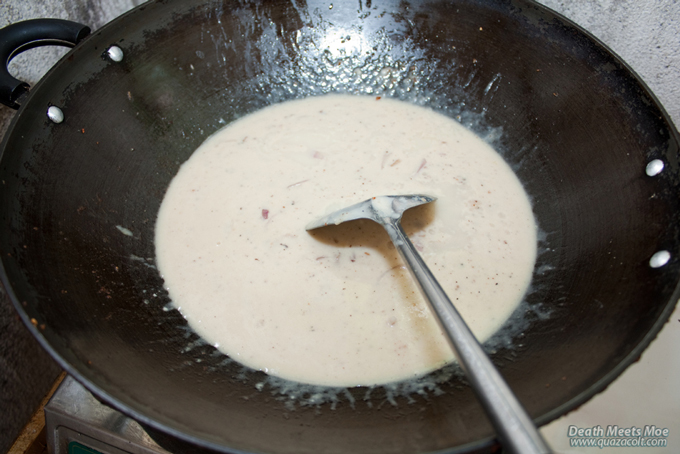 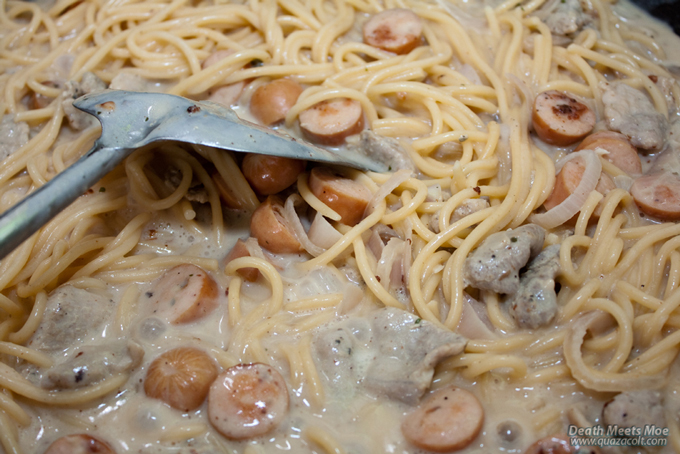 And finally, the result: 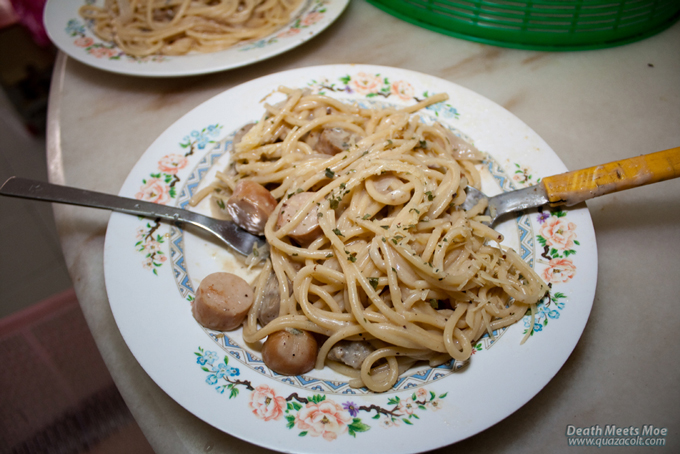 Sprinkle some Parmesan cheese and parsley, and it is finished. Hope you guys like the above recipes/pictures. Feel free to ask away if you have any questions pertaining the dishes above. 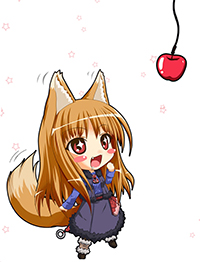