[youtube]http://www.youtube.com/watch?v=D70Hxro_agU&[/youtube]
Celex losing himself after a loss on the final match, out of very SMALL mistakes.

Now, before you guys start jumping on the gun and point fingers calling him some emo-kid and telling him to kill himself, this whole chain of event that ultimately led to this sad outcome was due to the last final match-up at the Intel ESL WoW 3.0 arena tournament and before that, numerous World of Warcraft LAN tournaments such as the MLG that also resulted in their team a second place winning. So close, yet so far just couldnt sound any better right now.

If you have been paying attention to the new patch 3.0, or watched the Intel ESL tournament that just recently concluded, it is basically a blow up gibbing fest, and for team gravitas (the team Celex [mage] is in) the last few matches came down to a mage + priest mirror fighting off each other as both team’s rogues (mirror RMP [RogueMagePriest] agains team SK-gaming europe) exchanged KnockOuts early on the game almost as quick as around 20-30++ seconds of the matchup upon engagement. In the last particular final game deciding match, 5-5 tied sk-gaming and team gravitas, celex and ely (priest) of team gravitas had made minor mistakes here and there, however, i personally think the biggest, out of those small little mistakes, is celex accidentally moved during an evocation channel, resulting him to be oom (out of mana) the entire time and being non-stop preasured without the ability to fight back. At that point in my opinion, they had already lost.

I just have to say that its a real pity that team gravitas lost that last final match, they had been together for a very long time, scoring numerous 2nd place finishes. My advice? Just stick through it, and eventually who knows, if team gravitas’ infamous RMP team might eventually take home a first place finish, not only redeeming themselves, but also a much needed american victory over the much heated argument of america vs europe in WoW tournaments, in which case europe is currently having the lead.

As for WoW 3.0 itself, patch 3.0 as we all know, had been around for a week, and its more or less a mixed feelings for almost everyone, including mine. To sum it up, its a blowup fest, everyone is dying in a matter of seconds, heavily resilience geared or not, it just gives you a couple extra seconds, or, avoid that dreaded 1 shot kill that some of the newbies are facing with the recent patch 3.0 changes.

Just like previous pre-TBC (TheBurningCrusade) release, they had patch 2.0 for the level 60s to play with and oh boy was it crazy enough. And now with 3.0 on level 70 high end gear (note: pvp gear that involves a lot of burst dmg over pve’s sustained dmg) everyone is killing everyone in a blink of an eye. My rogue had pretty much the best of the best gear minus a few not-so-crucial pieces, and i am dying to the hands of those dreaded Retribution Paladins in a matter of 1 HoJ, (Hammer of Justice) which is a ranged stun for aproximately 7 seconds. Granted retdins were hotfix nerfed pretty quickly, they are still pretty damn game breaking especially in a 1v1 situation.

Thankfully though things hasn’t gotten TOO FAR out of hand to the point where healing wouldnt have mattered. They still do, and i have been blessed to have PUG healers keeping me alive for the slaughter. An IRL (In Real Life) friend of mine, that plays a priest in WoW with the name Haruhii, was healing me earlier tonight before this post. And see for yourself the result: 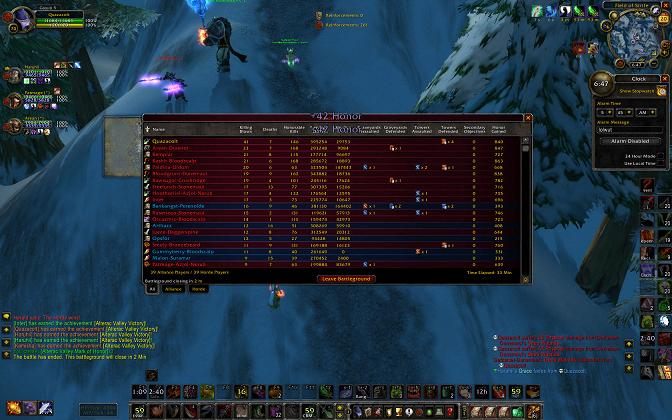 Later on i also played some arenas with my guildie Spira, except that its on his retdin (Retribution Paladins), and… yeap, matches are lasting no more than 20-30 seconds after engagement LOL. I have to say, while im not entirely liking it, it is kinda fun in a way – Gib or be gibbed. You’ll pretty much only see Retdin + x (where x are usually mage/rogue)  in the 2v2 now, as any combo without immunities is just asking for a free lose. That aside, arena servers are sitll buggy, and not to mention a lot of random and occassional lag spikes/delays. Totally NOT fun having a gib fest when you need to cast Divine shield. In case you didnt know, divine shield is instant-cast, so you kinda get what im implying here, yes, really BAD lag.

We’ll just have to see how this shortly interesting 3.0 will play out before WOTLK (WrathOfTheLichKing) hits on november 13. Until next time, ill be off to catch some anime thats been pending for a bit at 1:15AM 😛
And for the folks at TFM that ive been promising my room pictures, it’ll just have to wait till tomorrow’s update. Much apologies ^^;