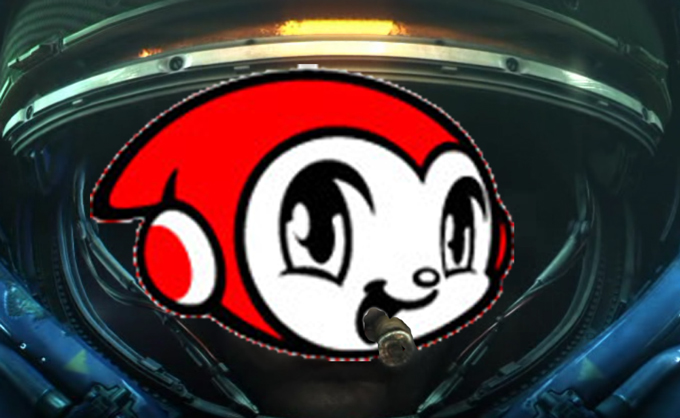 “Hell, its about time.” <– i know right? lol. Like, it could’ve been out latest tuesday, but nooooo, tmnut screamyx decided to give me a nice surprise buttsecks, and threw me back to the stoneage. So like, i was stuck with some 2KB/sec uploads that constantly time out, and some filtered out 140ish pictures (just the first day – saturday) or so to upload to the server. Like yeah, not gonna happen.

Anyways off with the rage, more AFA08! So, like the usual eager fanboi packing his stuff for the trip, i magically left out my handphone as i left it to charge. And thanks to some crappy accident, or more specifically, THANK YOU MALAYSIANS for raping the traffic by slowing/stopping down their god damned cars to watch the scene, i never got to turn back to grab it.

So we got on the Aeroline bus, i turned on my lappie and expected to finish tetsuwan birdy decode first season 13 episodes, and holy crap our bus wangan’ed its way to customs in around 4hours time? /omg

Since we’ve arrived unexpectedly early, and the MRT stations are closed, we stopped by Mc’Donalds for some breakfast. I even get to play a game of  Warcraft3 online b.net rated match with the free wireless 😀 It was lulz as the opponent just gave me a free win by having Bloodmage hero + spell breakers + sorceress vs my Tauren chieftain + grunts + demolishers.

We finally reached our hotel – Hangout hotel @ Mt.Emily and we were at room518 with a pretty nice view too as shown above. Pretty nice hotel for ~50+ sing dollars per person per night. Even comes with a bath tub!

Finally its almost time for AFA08 after lazying around the hotel room that the staff is so kindly allowing us to check-in earlier than the designated check-in time. We took 2 taxis to Suntec City hall, splitting 3 person per taxi, and woohoo our taxi won LOL! Arrived earlier even though it started later, for lower price 😀

The moment we came to the AFA08 entrance, it was really, how should i put it, awesome and despair at the same time, seeing a REALLY LONG line queue’ing. (although i expected a longer/crowider line/crowd considering its AFA08 :P) Anyways me and Sichiri have Diamond VIP, so we managed to avoid the line, and had early EXCLUSIVE (read:FABULOUS) entry to AFA08 😀 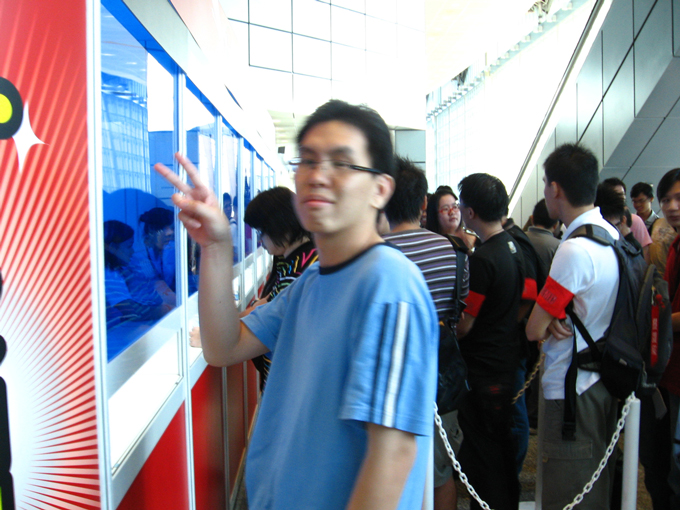 Lets not forget the TFM gang:

Even met this guy, aoshi’s friend (not E-Jump guys! LOL sorry on this misunderstanding)… which i couldnt remember the name -_-; (sorry!)

The guy with the Ichirou Mizuki VIP pass, not kira ejump on the top lol.

So we went in, first thing i see: 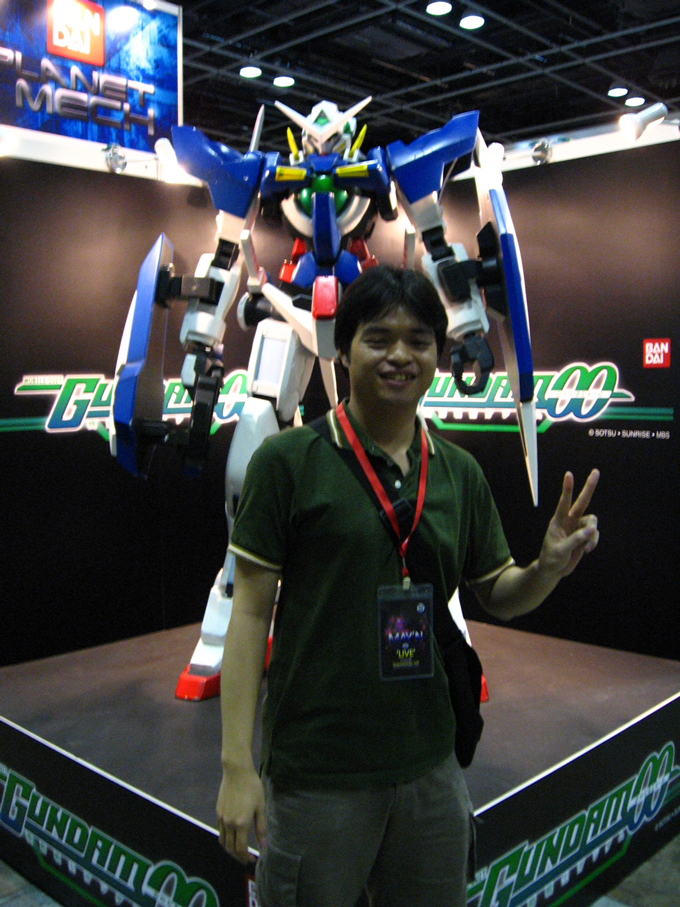 Like, i had to snap pictures of it, and pose myself with it. I mean, its Gundam Exia man!

Had fun scouting the entire hall (which is surprisingly “small” for an event this big) with most of the booths arent even fully prepared yet. Even saw the main stage being finalized: 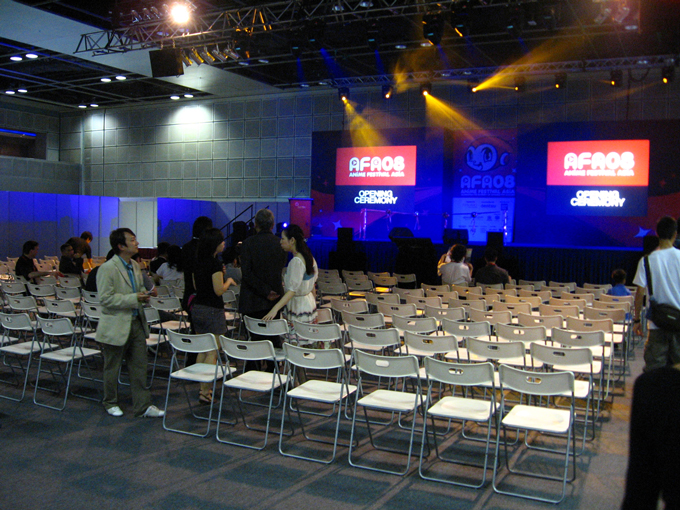 Odex even have their own booth, having some Cassherntora for the lulz by playing Casshern Sins with ToraDora! background rofl: 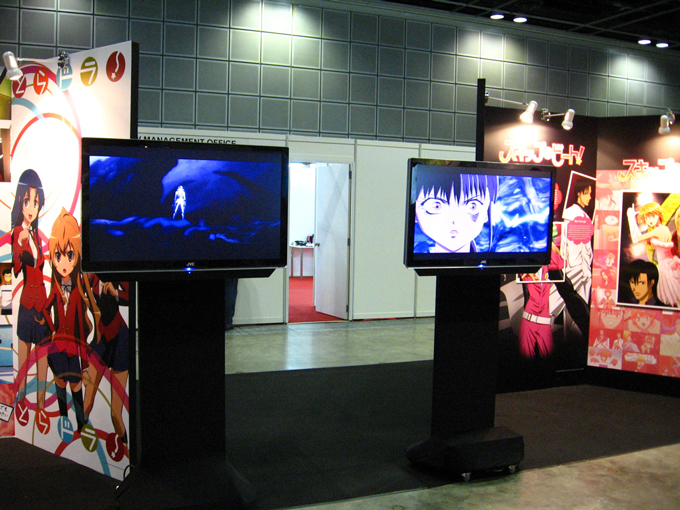 After done scouting, i head on to the main stage myself and wait for the opening ceremony. The moment it started, everyone’s greeted by the kawaii-Reiko with her heart warming voice:

After the whole long epic (read: boring. lol) speech from the AFA08 geezers VIPs, Ichirou Mizuki suddenly suprise buttsecks the crowd with his PUMPED mazinger Z Song. like WOAH! that was a GOOD wake up call. Towards the end the crowds were even singing along with him and chanting “Aniki! Aniki!” (big/older brother).

The opening ceremony concluded shortly after with somemore speeches and stuff from both Ichirou/Reiko. I have to say, thanks to Ichirou, its one of the BEST event opening ceremony thus far in my experience. And there you go, AFA’08 officially begins! 😀

Not much happenings between the time from now to lunch hour. I did however grabbed the WoW Series 3 figure set from DC comics for SGD80 (a set of 4 figures!) and Sichiri with myself, grabbing Alter’s Hazuki from Tsukuyomi Moon Phase anime for SGD30 XD After that we went to lunch at Marina Square with the /AS/ guys and TFM guys.

After lunch, while being utterly bored from the lack of cosplayers and happenings during the first half of AFA’08, me+E-jump+Sichiri happen to stumble upon some private interview of Kunio, the gundam guy 😀 Obviously we got a few shots ninja’ed before the staffs signaled us to leave and closed the room’s door XD

As the event goes by after lunch with more and more cosplayer showing up, we found… LOLI! 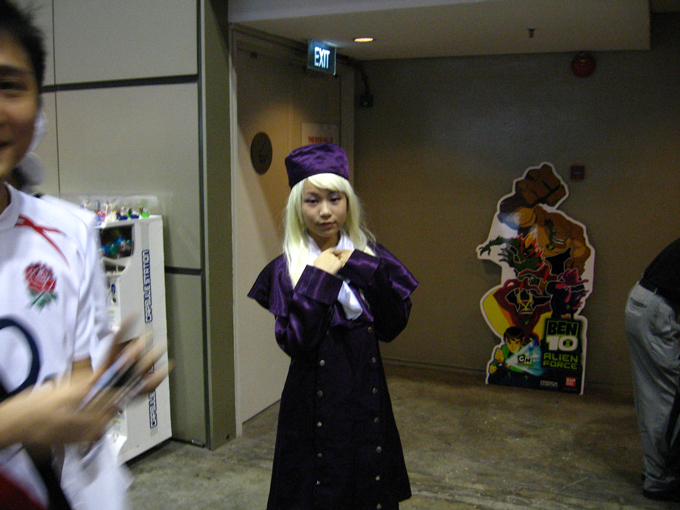 Like, suppressing unspeakable urges to kidnap this purple loli LOL! While im no fan of fate/stay night, and definitely never seen the anime/played the eroge (though mana transfer is pretty damn tempting LOL), i do *SLIGHTLY* know of their characters. (who doesnt know the MASS saber merchandises? lol) Unfortunately, i dont know this one in particular and after asking my friend, and some wiki, i found out that shes apparently some german loli named “Illyasviel von Einzbern”. Magic sperm you say? So THATS the secret ingredient for lolis? Now if only i can grab some magic…

Awhile after probably around 3-4ish PM, most of us returned to our hotel rooms from exhaustion (remember that midnight bus trip? no sleep? yeap.) The initial plan was to get going around 5-6+ PM to attend Ichirou Mizuki’s concert. However, we ALL epic failed minus one – E-jump. Most of us either overslept, or just didnt want to move anymore.

Some summary + full gallery consisting of around 120 pictures arranged chronologically:

Gallery for all of the AFA’08 Day 1 pictures are here.

PHEW! Thats it for now. Thanks for your patient to those that are having that eternal wait for this slowpoke.jpg update. Dont worry folks, theres another major update for DAY TWOOOOOOOOOOOO. (will try my best to speed this one up this time around >_<)

Before i end this, lets have a contest! WHOS LOLI’ER? ILYA FROM AFA? OR PENGUIN FROM ACF?